Rabbit Has a Nightmare 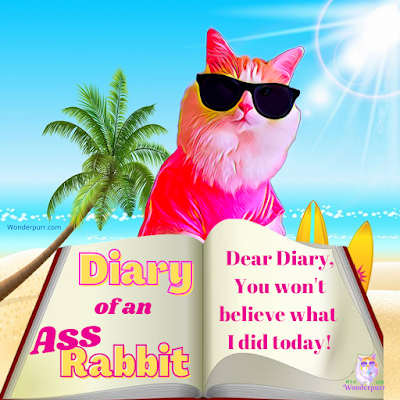 Dear Diary,
I recently had the worst nightmare ever. The reason why I'm even bothering to write about this is because... usually... I'm the nightmare someone else is writing about in their diary.

It all began after I'd enjoyed a particularly nice afternoon. The sun was shining, the birds were chirping... Opie hit a new decibel screaming cuz I'd dared to look at him. Seriously, the Ginger Wuss doesn't need anything more from me than a side glance to get his tiny tail all knotted with stress... which I actually take as a compliment. His hissy fit came on the heels of Dori complaining to Mom that she didn't appreciate me putting the bitey on her neck without first asking.

First asking?!?  Wouldn't that take the fun out of hunting her? In the jungle, lions don't submit a request to antelope to inquire about a good time to hunt them. NO! They drop onto their backs from a tree, and ... well... dinner is served.

So, Mom was already fed up with me from my morning activities. That's why she put me in my prison jams, and sent me to my room to *makes paw quotes* think about what I'd done. Pffft! I didn't have to think about it. That's what I love about being me:

Once settled in my ZenDen, I quickly fell asleep. By not being a slave to my conscience, I always sleep pretty darn deep. 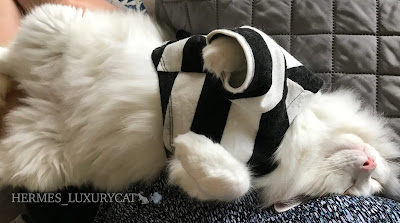 I dreamed the Ginger Wuss had lost his voice. All he could do was open his mouth with silent screams when I looked at him. I immediately lost interest. Without sound effects, bugging Opie just wasn't any fun.

Next, I dreamed Dori grew wings! But she couldn't fly, and when I jumped onto her back and put the bitey on her neck, she tasted just like chimken. Now this is the kind of dream I enjoy. However, no sooner did I bite her neck, than she grew a beak and started pecking at me. She pecked at my throat, and pecked at my face. I got so freaked, I quickly turned tail, but she came running at me with her wings flapping, making this weird kind of clucking noise. I sure didn't like that dream at all.

Then I had a dream that started out nice. I saw my Dadders waving fuzzy pink on a string, a game I enjoy playing. But then...

This is when I realized I was having a NIGHTMARE! 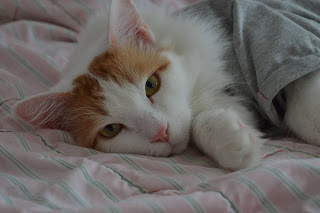 I awoke with a start, sweating profusely... mostly from wearing my prison jams while lying in an afternoon sun puddle. But still, the nightmare shook me to my core. Then I wondered, had I dreamed it, or had it really happened? I had to make sure I was still Dadders' favorite.
Mom had neglected to lock my ZenDen, so I slapped the handle and opened the door. I then raced through the house, sniffing for Dad's location. I didn't see him with Feral Chevy on the Catio. Good sign it had been a bad dream. A nightmare!
Finally, I located him in the room where he deliberately steps under water. I do not understand this strange behavior, as I purrsonally avoid water at all costs, except to wash the taste of noms out of my mouth. Anyway, he was in that tiny closet getting wet. At least he wasn't cheating on me with Chevy.
Then I smelled something wonderpurr. Something stinky. I followed my nose to the top of the bathroom counter where I found a pile of his clothes. Mmmm, yes. This is the aroma I truly love. Whenever Dadders disappears from the house to play something called Chase Ball with Stick, he comes home stinking real good. And there is nothing I love more than smelling his clothes. 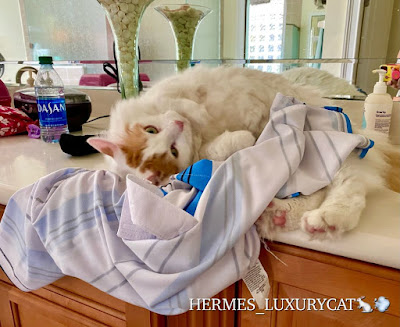 As I rolled in his shirt and shorts, I felt reassured that indeed, Dadders hadn't cheated on me with Chevy. I'd just had a horrible nightmare. I'm sure if I told Mom about my nightmare she'd say something Wimminish like, "Now you might understand what Dori and Opie might experience in their dreams when you upset them."
I did actually think about what Mom might say... But then I thought...
Nawww. 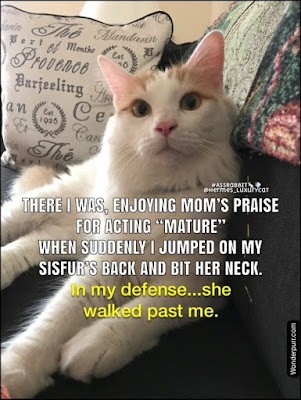 rabbit, yoo crak me upz, but we wish yoo wood not put da bitey on dori and wez wantz to know when the next garage band pratise iz

Oh, MY!!
Now don't go putting more biteys on Dori...afterall she is your sisfur and you are supposed to purrtect her...ya know??

Dang Rabbit, I'm glad it was only a dream, really!

OMC that was certainly a terrible nightmare!!

We love your jammies!!!

Rabbit, your prison jammies are prettty cute and seem quite appropriate! We are happy your dadders did not abandon you for anther cat. We know you do not have many friends. Try to be a good boy and give Dori and your mom a break. XOCK, angel Lily Olivia, angel Mauricio, Misty May, Giulietta, angel Fiona, Astrid, Lisbeth, Calista Jo, Cooper Murphy, Sawyer & Kizmet

Love that prison garb Rabbit you are stylin! Not sure what that nightmare means but if you hear Dori on the other side of the door with the flutter of a wing, Dont Open the Door!

Rabbit, I'm seriously starting to doubt this "Ass Rabbit" thing. You're just too adorable to cause all that mischief. Some cat is framing you! Maybe Dori pours tuna juice on her neck or something ...