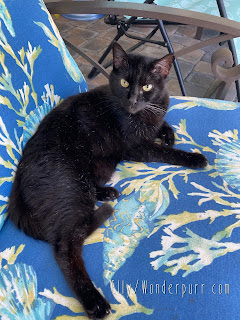 Written by Hans Christian Andersen, The Princess and the Pea is a fairytale that makes even modern royalty look undemanding.

It tells the tale of an incredibly picky prince who was having trouble finding himself a bride.

Actually he knew who he wanted for his bride but she was a married woman who chain-smoked, and frankly she thought the whole idea of being under a microscope as the wife of the future king was rubbish.

Oh wait. That was a more recent prince.

Or too old. Too naive. Too racy.

Too serious. Too chatty. Too quiet.

Jeez man, make up your mind. 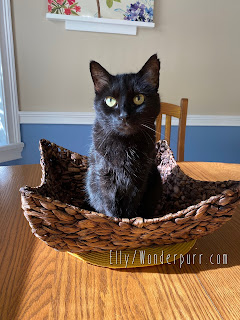 Then one dark and stormy night -- a prerequisite in all good fairytales -- a mysterious lady turned up at the castle door requesting somewhere to sleep for the night.

For whatever reason, she told the prince she was a princess, because obviously a princess would be out on a dark and stormy night without palace bodyguards, her butler, her dresser, her chauffeur or executive chef.

The prince let her in. Despite her soggy dress and dripping hair, she was a looker.

However his overbearing mother had been born royal, married royal, and bore royal fruit. She would never be caught dead running around at night in soaked clothes, unaccompanied by her ladies in waiting. Therefore she had doubts on the stranger's claim and hatched a plan to test the girl's regal status. 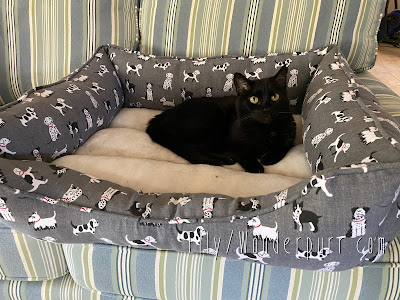 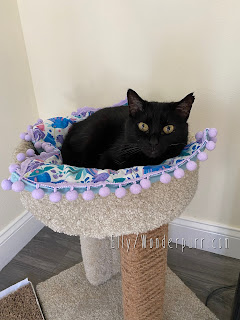 The supposed princess was offered a preposterously magnificent bed, topped with over 20 mattresses, with a single pea hidden among the ludicrous amount of bedding.
Somehow, she managed to climb into bed and upon waking the next day reported that she couldn’t sleep because she had been in great pain and was bruised by something in the bed.
The prince declared that only someone accustomed to the finer things in life, such as a tower of mattresses, could have experienced pain from a pea, and so the two married.
Not only is this bizarre because someone could feel, let alone get bruised by a single pea among a ridiculous amount of bedding, but also because she agreed to get married so soon. 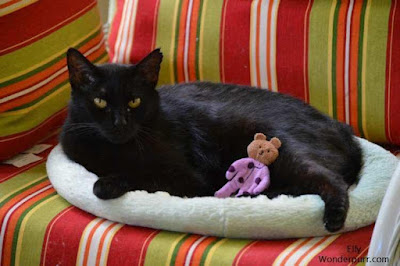 STORY BEHIND THE STORY 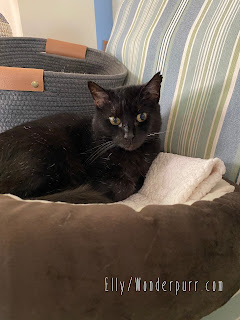 Today's fairytale features Elly, our very own Panther Princess who lays claim to numerous beds throughout Casa Wonderpurr. I only recently became aware of Elly's bed domination when I placed a cushion on a newly recovered chair and saw her immediately jump onto to it, and take a nap.
From that point on, no one else used that bed. I started taking photos of her in various beds around the house. And noted that no one else used those beds. Elly is one of my sweet but sassy former colony cats. She is FIV+, but never combative so she lives free and easy among the Wonderpurr Gang.
There are two Hallmark stories that accompany Elly's life with us. The first being when my beloved Noah brought her to me from the woods, just like he brought me Candy. However Noah was sick and passed not two weeks later. His final gift was Elly. 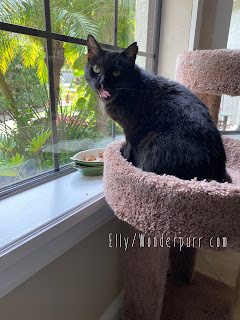 The other story is how desperate she is to remain an indoor cat. She had been indoors for about two years when we had the carpeting replaced shortly before we put the house on the market. We told the carpet installers NO CATS OUTSIDE. So when Ray saw a tiny black cat on our back porch that overlooked the woods and creek, we were upset. She probably was lying in a sun puddle near the front door when the installers went out, pushing her outside with them. Anyway, she headed for the woods as I ran around the house to get her. Knowing how feral she can be when it comes to being handled, I felt dread that I would lose her. The woods hide a creek that was steep and dry. If she decided to run, she could fall and there would be no way I could rescue her. 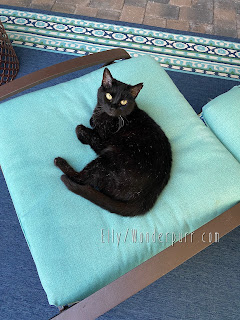 Instead I didn't try to go to her, rather I called her out. We carried on a conversation for some time with me calling her name and she answering me with a tiny meow. Finally she emerged from the woods. Oh, I didn't tell you: it was fall and there was a thick carpet of brittle leaves I would need to carry her through to get her back inside. No one was more shocked than me when she let me pick her up, and walk ever-so-slowly through the leaves. With each step I clutched her tightly. How would I get her inside without her EXPLODING all over me? Talk about murder mittens, she's tiny and mani-pedis are a definite No No. But when I rounded the house and reached the front door, I somehow mustered the confidence to hold her with one hand to open the door, and then FLUNG her inside. Needless to say she scampered off, overjoyed to be back inside. 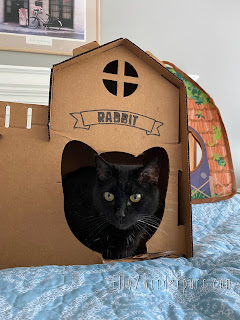 Elly's favorite person is Ray. She's been a touch-me-not until we moved to Florida. Now she dominates his attention when he sits on the couch, or on the floor, or goes to bed. She barely waits for him to lie down before she jumps on his chest to demand pets.
Small but fierce, she is one of three (Candy and Frank) not impressed by Rabbit's pushy personality, and will smack him across the puss when he tries to goad her into running so he can chase her. Rabbit isn't truly a bad boy, he's just... just... *sigh* An AssRabbit.
We love our Panther Princess, and cannot imagine life without her.
Even if she is a bed hog. 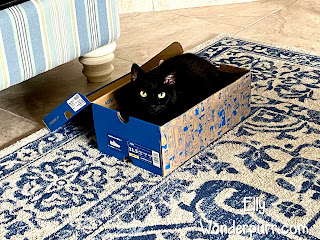 Email ThisBlogThis!Share to TwitterShare to FacebookShare to Pinterest
Labels: Life with the Wonderpurr Gang, Our Rescue Stories

Aww, we are glad to read that Elly is now a furrever housepanther!
Our Sweetie was TNR'd in 2009, and I trapped her to bring her inside in March, 2020.
She took to having a litter pan and her own soft beds right away, so she probably had a human at some point.
Now, mostly deaf and with only four teeth, she is growly and none too active, but she climbs onto my chest and purrs, and that's the most wonderful thing ever!

Two entertaining stories. Loved them both, but your panther princess is my favorite. I'm glad you rescued her from outside.

Have a fabulous day and week. Scritches to the furbabes. ♥

the girl knowz what she wants

Well she certainly is a beautiful Princess and looks most Royal!

Elly is beautiful. Thank you for telling her story.

What a sweet story.
We have had several experiences with pea in bed but not spelled that way. Most of that has resolved as the kitties matured.

I am so glad you rescued this beauty.

I LOVED this story! Too funny that Elly hogs all of the beds! Elly is with Ray like my Roary is with Lenny. Roary prefers Lenny to me (much to my dismay because both of my other cats were velcro cats with ME)....Sooo happy Elly now prefers to be INSIDE!! Well done getting her back in!

We call our Ellie a Panther Princess too. My favorite picture is Elly in Rabbit's house. You can tell she's not impressed by his ... spirit.

When a princess needs attention, a princess NEEDS attention. Can't blame a girl for askin' for what she deserves, right? PURRS

We think panfur princesses are the Greatest!

Cats have BIG personalities, even the tiny ones. Angel Nellie RULED with an iron paw even though she was teenie tiny (4.5 lbs). Sometimes welding gloves were required. I love you tale of Ellie! Thanks for coming to Marv's Birthday party! Keep being awesome!