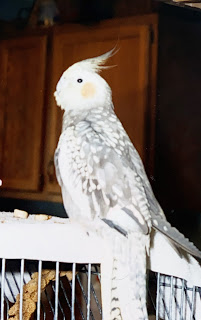 Celebrating the memory of the incredible Woody Boyd, a cockatiel born on the Fourth of July 1987.In hindsight I should have called him Yankee Doodle.We adopted Woody from a not-professional breeder cuz we were young n stoopid. But he was so sweet and incredibly smart.He came to live with us maybe around 12 weeks of age. I had him saying his first word inside a week: Pretty. Which morphed into Pretty Pretty Pretty which morphed into Pretty Boy.He learned his name. He called himself Woodo. “Hello Woodo” he would say into a mirror.I recall saying “I don’t believe it” to him. He flew to my shoulder and pressed his beak to my mouth, his way of wanting to learn. He picked up that phrase incredibly fast and used it a lot.I also taught him “I love you” but it was difficult for him. Still I said it often and he learned it. In fact the little smarty pants used it when he behaved badly and I’d scold him. “I wuv yoo” he’d coo sweetly and all was forgiven.He could be a little stinker. He loved to perch on our shoulders and would nip a mole or our ear. Then laugh wildly.I also taught him to whistle various melodies, among them the theme song to the Andy Griffith Show and Jingle Bells. However he would create his own songs by mixing the tunes to suit his mood. 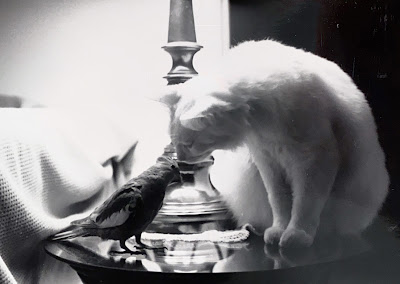 Woody meeting Genny for the first time 1987
We had a tiny tortoiseshell named Mandy and a gorgeous white Turkish Angora named Genny. Woody loved Genny. I mean LOVED her. He would tear apart a box of tissue and tuck it into a shoebox to create a nest. Then he would coo and chat (mimicking conversation) to coax her over. She was very good natured and would inspect the box while he showed off for her. He didn’t like Mandy and would chase her to nip her paw or tail. 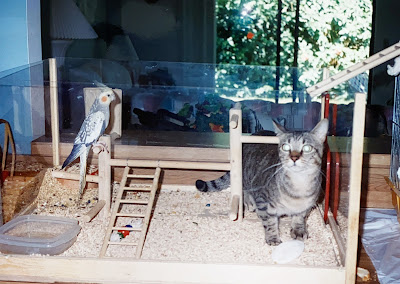 Ray built a plexiglass playpen the size of our kitchen counter for Woody. He filled the floor with ground corn cobs and we put in toys and swing. He would sleep in his cage at night, but the moment I opened it he would shoot over to his playpen. That's Buddy (who lived to age 24) in the photo above with our second cockatiel Harley. The playpen was a huge hit for many years for birds and cats both. In fact we still have it boxed in the attic just in case we ever adopt another bird. Unfortunately that won't be for quite awhile considering we now have cats from colonies and one unpredictable AssRabbit.
We allowed Woody freedom to move around the house, although he had one wing partially clipped to keep him from flying off.We would take him outside riding on our shoulders to enjoy the sunshine. One time he flew and landed on the grass. From out of nowhere a stray cat shot out of hiding and grabbed him. While we freaked and ran after the cat, Woody screamed at him using words. The cat clearly was unnerved to have his prey yell at him. He dropped Woody who ran through the grass back to me. After that we clipped his wing and tested him to see if his flight feathers had grown back before taking him out. 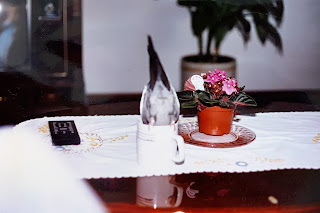 Woody loved to drink out of our glasses, and sample food from our dishes. One of the last memories I have of him is the day before he passed at age 2 from kidney disease (bad breeding) as he sat happily in a bowl of peas, swallowing them while laughing like a crazy man. It's a poignant memory. We loved him so very much.
While Woody Boyd was with us only two short years, he made a huge impact on our lives. 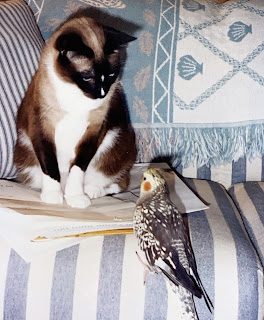 We missed him so much, we ended up adopting another cockatiel named Harley - should have been Harleigh as he turned out to be a she.
And because she was a girl, she didn't possess the same ability to talk. However she was a character in her own right and lives on in our memories as well. Mostly on how she was boy crazy and loved Ray - and any man who entered our home. Our friend Bob would come over and laugh while Harley perched on his shoulder, taking bits out of his pukka necklace. We also have memories of Harley jumping into a big bowl of popcorn set out for guests, and laughing happily while throwing popcorn out of the bowl.
That's our Siamese Holly with Harley in the photo, circa 1992.
I miss having birds. While we lived in Jacksonville from 81-99 we also adopted an abused red parrot named Caija, and I rescued two parakeets from PetsMart whose wings had been clipped on both sides preventing them from flying up to the perch where their food and water bowls were. That's another story.
Every July 4th I take a moment to remember Woody Boyd, whose huge personality continues to live on despite his short life.
Hope you enjoyed Woody's story. I have so many about my beloved fur kids, I plan to share them more frequently here on Wonderpurr.com 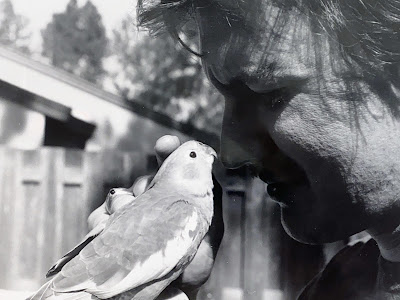 Email ThisBlogThis!Share to TwitterShare to FacebookShare to Pinterest
Labels: Life with the Wonderpurr Gang, Our Rescue Stories

Hugs and purrs during this remembrance time for you.
Their love is in our hearts forever.

I did enjoy Woody's story. He sounded like a real character.

i did enjoy this post for woody..never knew you guys had birds…
i don’t remember the “type” but there’s one bird who I heard can
live to 60? thanx for sharing woody and the crews story ❤️

I LOVED this story about Woody!!!!! What an amazing bird! I also wanted to thank you for your sweet and kind comment on my blog post about Cody ((((hugs))) and love to you as you remember your furry and feathered babies as well.

Really enjoyed learning about Woody and Harley. Mom’s grandma always had some sort of bird. Mom and Dad took care of a robin, Edith (for Edith Bunker whose personality the robin had). Edith had been injured by a dog. Even when she healed she didn’t want to leave, so our dad built her a perch outside. Then finally one day, she flew across the street into dense trees, and they never saw her again. She was pretty funny from what we hear and loved to dive bomb guests, who had no idea she was in the house. Mom did cross stitch back then, and she would always steal her thread. Mom also wrote for the city magazine back then, and Edith loved to sit on the paper in the typewriter and peck at that. Thanks for sharing your memories, as it brought up many great ones for our mom. XOCK, angel Lily Olivia, angel Mauricio, Misty May, angel Giulietta, angel Fiona, Astrid, Lisbeth, Calista Jo, Cooper Murphy, Sawyer & Kizmet