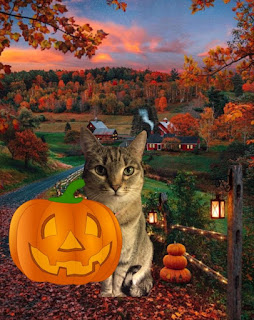 Every Octopurr I tell Spooky Stories on Tuesdays. In the past I made up the stories. But this year, the spooky stories are REAL! How real? Well… the entire Wonderpurr Gang was moved against our will from our cozy home of fourteen years (twenty minutes from Elvis Presley’s backyard) to the strange land known as FloryDa. Yoo know there are a lot us in the Wonderpurr Gang, and most of us come from a feral cat colony. So not only was it super scary moving us, but also unplanned adventures kept happening to keep us from arriving safe. So grab yoor bucket of candy corn and yoor hot mug of apple cider, cuz for the next four Tuesdays, I’m going to scare every one of yoo with Behind the Scenes stories of how we moved to FloryDa without losing a single cat (although my pawrents sadly suffered the loss of their minds.)

It was a Dark and Stormy night… 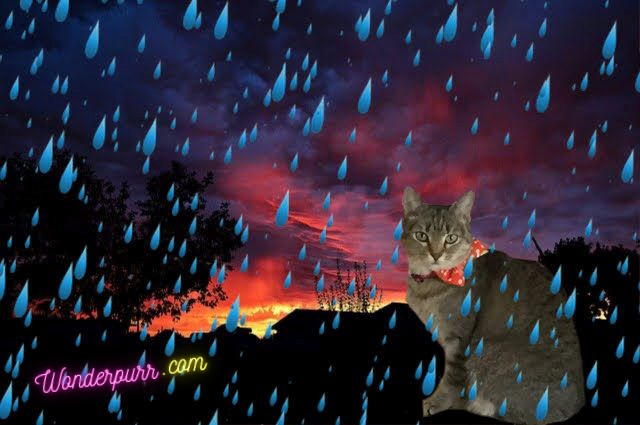 Actually, the sun was fweakin hot n humid on that last day in Southaven, the place where we lived my entire life. But eventually that Dark and Stormy night showed its ugly face and caused my very tired, near hallucinating pawrents to fear they might not make it to FloryDa safely.

But I’m getting ahead of myself. My story actually begins two years ago when my Daddy picked a date in the future to retire from the place that makes Amazon boxes. As they paid him enough monies to support The Wonderpurr Gang’s lifestyle in which we were accustomed to, it was a big decision. But Daddy was of the mind that Life was picking up speed and he wanted to be able to enjoy it before … um. Something about knees not bending, and back hurting, and gray hares hopping all over his head. I dunno what the Friskies he’s talking about, but I took that all to mean he was old enough to have seen at least six of his nine lives, and wanted to be able to have fun and travel while his body was still holding out.

So with that decision, Momma went to work purging the stuff that had accumulated in two of our walk-in attics, and in the many closets that filled our five bedroom home. “It’s like someone has crept in during the night for the past fourteen years and dumped junk in my attics,” I overheard Momma tell someone on the phone. “Where did it come from?”

To help Momma, I asked my fursibs if they knew where it came from, and they all pointed to both Momma and Daddy, so I had no choice but to come to the conclusion that my pawrents are sadly getting so old they forget more than they remember.

Where was I? Hmmm. Oh! Fast forward TWO YEARS into the future from the day Daddy mentioned retiring for the first time. In the cat apartment, where once we enjoyed peace and quiet, not to mention a litter box pool, and climbing trees, we now looked at mountain of boxes. And not the kind of boxes where we could climb and hide in. No! They were filled with stuff, and there was writing on the boxes telling the hoomons what was inside. Sorta like secret code. At least that’s what Daddy said because he can never decipher Mom’s shorthand. (And that’s the way she likes it.) 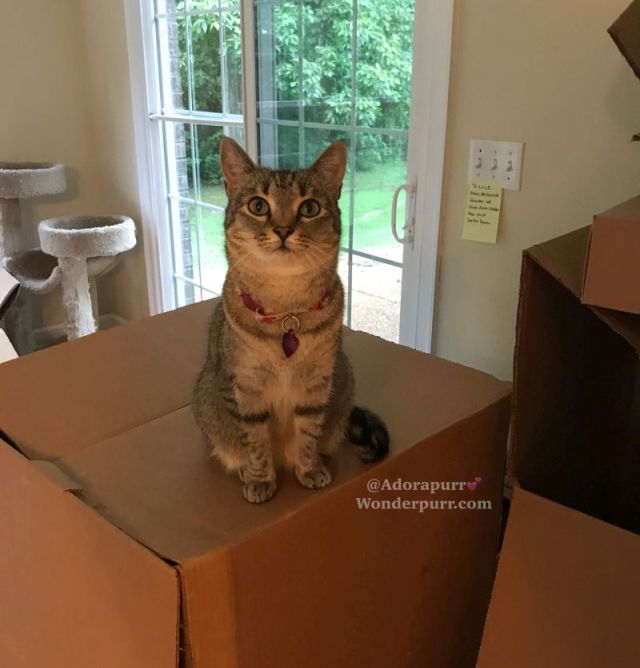 The super scary part, at least for me and my fur sibs, was that furniture was dissy-pearing. Rooms that held beloved beds and chairs and couches were now empty. And strangers kept ringing the doorbells to come inside our home and take stuff away. Momma told me she was selling on Facebook. I purrsonally didn’t care, but the ringing doorbells scared the dickens out of me. I had to flee under the bed every time. One time I was under a bed…and suddenly the whole bed was picked up. I nearly pooped my purrple underpants!

Then came the day in June when the noise and strangers simmered down. And a couple beds reappeared, although they looked strange. Because my pawrents had gotten rid of most of the furniture, the rooms looked pretty empty for the realtor photos to sell our home. In fact, the Senior Cat Apartment upstairs (the seniors claimed it because they just couldn’t hack living with an AssWabbit any more) and Mom’s office downstairs looked really nekked.

Then Mom got the idea to buy two inflatable mattresses. She then put the mattresses on storage boxes, and covered them with pretty bedspreads and pillows. Adding a table and a lamp, and a picture over the bed using them sticky hangers, the rooms transformed into bedrooms. And when strangers came inside to look, they were exclaiming how adorable the bedrooms were.

They had absolutely no idea that were a bunch of us scared kitties hiding under the beds. 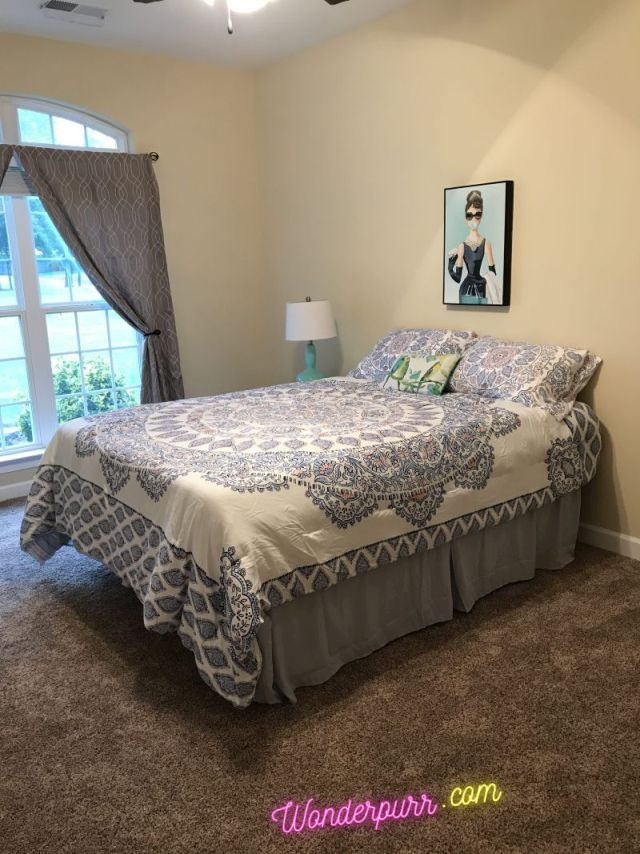 “Life is an Illusion,” Momma always tells me. That’s why she always rings the doorbell before people come over so we scatter, and don’t look like there are as many of us as there is. Cuz hoomons don’t always understand people who rescue cats, and Mom has rescued over 100 during her adult lifetime. She’s pretty much done explaining to clueless people why she has so many cats. Especially feral ones.

Now what I forgot to mention is, my pawrents had their home inspected, and there was a few things that needed to be repaired. Not many. Daddy had repainted the entire house, and gone through fixing stuff. Like refinishing the staircase that he built himself back when our house was new. 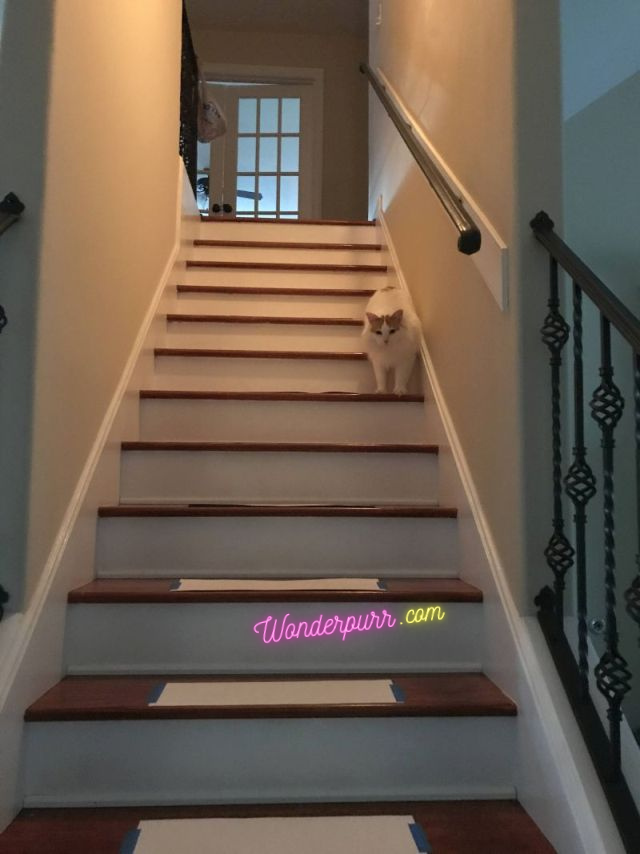 In fact he’d fixed stuff throughout the fourteen years, so the house was in excellent shape. But of course there was a couple windows that didn’t close right, and the original house builder did a hack job on the exterior seals, so Daddy replaced them. And of course the refrigerator water decided to freeze up the day before inspection, along with the dishwasher that decided to leak. Yep. That’s right. Worked just fine until the day before inspection. *Big Sigh*

My pawrents told their realtor that they were delaying the first showing one day. Realtor lady wasn’t happy, but Dad said tough cookies. After all the work they put into the house, and seeing how gorgeous the photos looked done by a professional photographer, they decided to let the photos go out one full day before allowing anyone to see inside our house. Daddy said this would create a build-up of interest. Well, it worked. There was a lot of hoomons lined up to see our home. But because Momma didn’t want us kitties to go all day without potty and meal breaks, she only allowed five people to see the house the first day. We got an offer the first day. 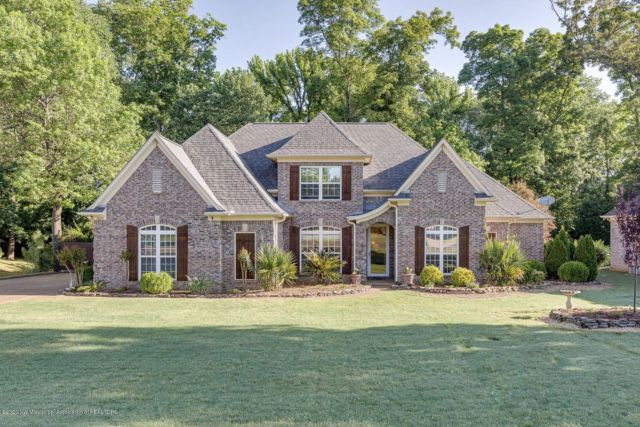 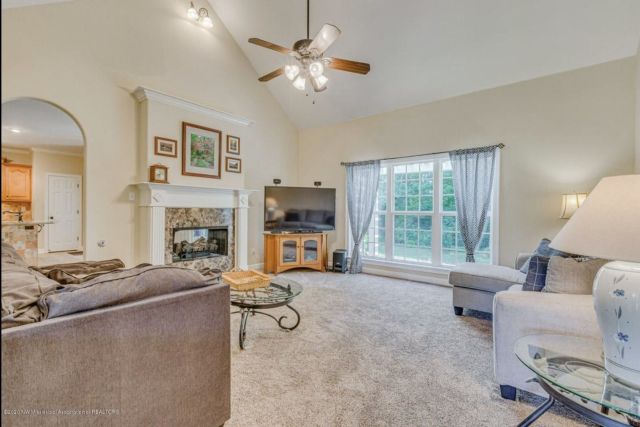 Then the second day, only five more hoomons were allowed inside. Boy, the realtor was not happy, because she had all these people wanting to see it. And her Facebook chat about our house had gone viral with thousands of views. But again, the Wonderpurr Gang came first, and because we have a lot of seniors who couldn’t go all day without a litter box, Momma said no more visitors. We got two more offers the second day. 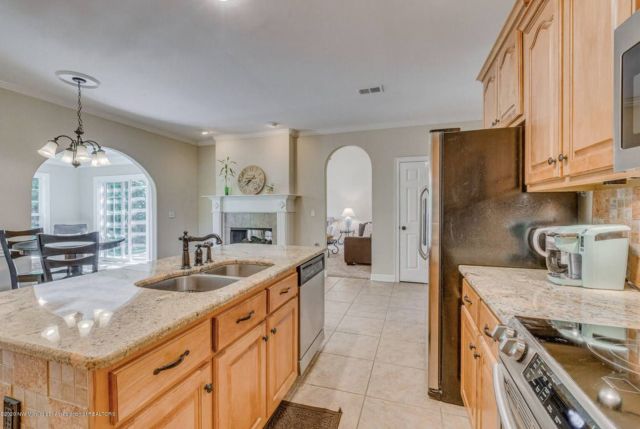 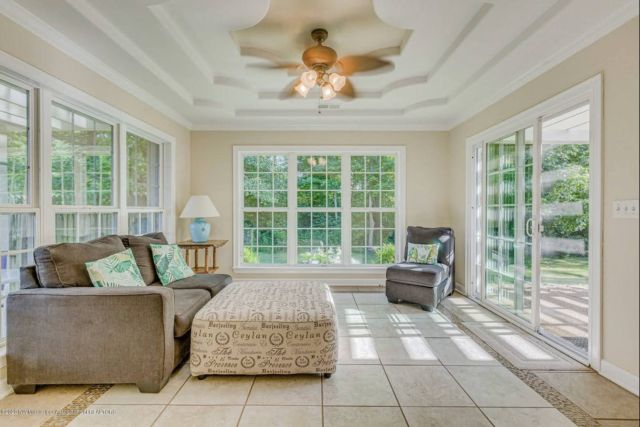 And that’s when my pawrents said no more visitors, period. Daddy half-joking told our realtor that he thought those making an offer on our home should include a letter as to why they wanted it. And you know what? The winner was chosen because she actually did that! She actually wrote a very lovely letter telling us why she wanted to move her family into our home. But really, the reason why she was the winner was because she gave us a month to move. You see, we weren’t moving to another nearby street. We were moving to FloryDa, a state that in order to get to we had to travel through Mrs. Ippi, Ally Bama, and At Lanna <- super scary!

For the past year and a half my pawrents had traveled there six or seven times, looking for the purrfect home for us. They finally found it in Palm Coast, on the northeast side of the state. They lived in Jacksonville for eighteen years before Daddy went to work for the company that makes Amazon boxes. So they knew the area. Momma especially liked it because she has weather phobias and that area isn’t known for sinkholes or hurricane damage. They found the purrfect neighborhood behind gates, and the purrfect house (or so they thought) with a huge water bowl in the back yard. The screened in patio would allow the Wonderpurr Gang to get fresh air, as it was three miles from the ocean.

The only trouble was, it took 12 hours without stopping to get there. And as that scary bad Chinese virus had suddenly turned the world upside down, traveling anywhere, even to the grocery store, had not only become dangerous… It had become deadly. 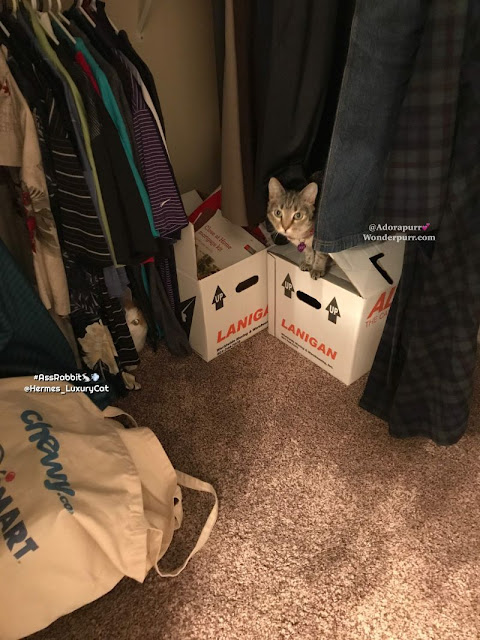 Please return next Tuesday for Part 2.

Until next time, Spread the laughter, share the cheer.

Let’s be Happy while we’re here!

Posted by Herman TattleCat at 11:08 AM 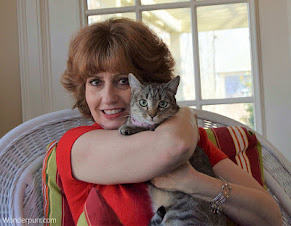 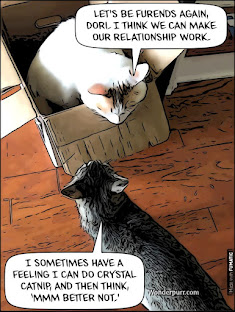 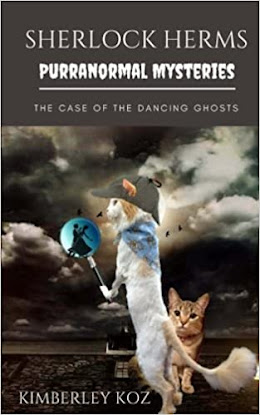