Let a Smile Be Your Umbrella 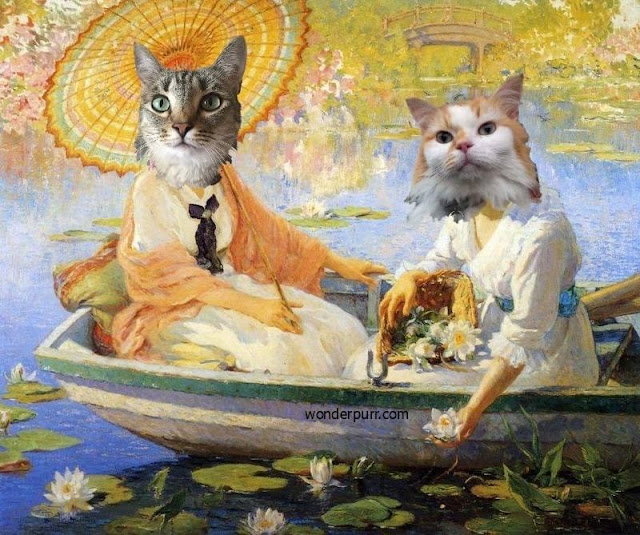 Dori: I'm not feeling so happy. Purrsonally, umbwellas scare me. One minute they're narrow and behaving themselves... The next, they fling open their moufs and puff up like a Persian having a hissy fit.

Herman: Our meowmy always says in order to get over our fears, we first must understand what we fear.

Dori: I'm okay not getting over my fear.

Herman: Hey Dori. Remempurr the time when Daddy spent his Memorial Day weekend on his knees?

Herman: No, he was removing cement grouting from the sunroom floor in order to put in fresh tile. They had started to crack because the cement underneath had not been put down evenly by the builders.

Dori: I wemempurr now. Daddy was mad about having to repair the floor in order to sell our house.

Herman: But he ended up doing a better job than the builders. He even put in a fancy tile design, and that's what the new owners loved about the sunroom.

Dori: What does that have to do with me holding an umbwella that I'm pwetty sure wants to eat me?

Herman: Daddy admitted he was afraid he would ruin the floor because he had never laid a tile floor before. But he confronted his fears by having a good frame of mind. By approaching the job with a good attitude, it invariably turns out to have a positive impact..

Dori: *looks up at umbrella* I still think it's big mouf is gonna chomp on me.

Herman: Honey, it's all about channeling good mental health. Not allowing things to upset you. Especially not on a beautiful day like today.

Herman: Something like that. Now we could ease your fears about the umbrella by tossing it overboard, but then the bright sunshine would burn your pretty nose, and probably the sensitive skin on your ears. So instead, let's have fun by imagining things that upset hoomons, but with a twist. For instance, what if someone sat in their parked car along a road during lunch time during the week wearing sunglasses, and pointing a hair dryer at passing cars to see if they would slow down.

Dori: Oh! What if yoo paged yoorself over the office intercom, without disgusing yoor voice. Momma told me that was actually done by a psychiatrist she worked for at a children’s mental health hospital.

Herman: Yeah, Mom has lots of stories about working at that place. What if every time someone asked you to do something, you asked if they want fries with that.

Dori: Put yoor garbage can on yoor desk and label it “In”. Momma did that at that children’s hospital. I think she'd been hanging out wif the nutty psychiatrist too much.

Herman: What if you put decaf in the coffee maker for three weeks? Once everyone has gotten over their caffeine addictions…switch to espresso.

Dori: In the Memo Field of all yoor checks, write “For Sexual Favors.” *giggles behind paws*

Herman: Finish all of your sentences with “In accordance with the Prophecy.”

Dori: Don’t use any punctuation, except commas. Use lots of commas.

Herman: As often as possible, skip rather than walk.

Dori: Specify that yoor drive-through order is “To Go.”

Herman: Sing along at the Opera.

Dori: Go to a poetry recital and ask why the poems don’t rhyme.

Dori: When the money comes out of the ATM, scream “I won! I won!” Daddy does this to embarrass Momma.

Herman: When leaving the zoo, start running toward the parking lot yelling, “Run for your lives. They’re loose!”

Dori: I'm pwetty sure Daddy did that too. How about if yoo invited yoor children over to dinner and told them, “Due to the economy, we are going to have to let one of yoo go.” Momma votes one of us kittehs off the Island at least once a week.

Herman: So, did this fun game make your brain smile?

Dori: Yes, I had fun. *looks up at the umbrella, closes it* It's a beautiful day, Hwermie. I'm letting my smile be my umbwella.

Sounds like your dad has a great sense of humor. I like that. He can also lay a tile floor very nicely too.

Have a purrfect day and leave that umbrella alone. They are dangerous. ♥

That was full of good lessons you two, bravo! Thanks for joining our Thankful Thursday Blog Hop!

What a lovely and funny post, Dori and Hermie!

That is a pretty painting. Working on a floor is hard work.

You made Mom and me giggle a whole bunch with this one! Giggling is a great way to pass the time so we thank you.....the world needs more giggles!

Those are too funny!! We think your Dad has a great sense of humor.

These are great ideas for making mischiefs. Shimshi has been taking notes... (mol)

Our huMom, at the beginning of All This, when she hadn't gone through drive-thrus that much, would point out that her order was "to go." She may try some of those other ones too.