Rude Visitor at My House 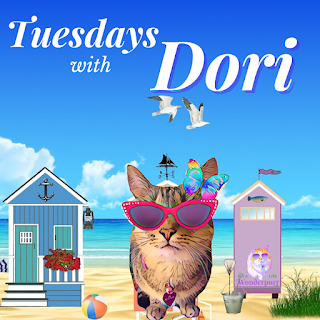 Since moving to FloryDa we don't have many visitors at our house. Thank Cod, because the sound of the doorbell or *gasp!* strange knocking at the front door just ... just... turns me inside out.

I don't know what yoo do, but I hurl myself through the house and dive under the bed.  Typically I use a Forward Dive, but there has been occasions when I've executed a Flying Hurdle ending with a Tuck Position. I know, very complicated diving terms, but I assure yoo, I am a pawfessional and have won blue ribbons from the judges.

So yesterday started out nicely with me wakey-waking Momma at six-thirty with a patty-paw to her cheek, followed by brushing whiskers over her eyes. I knew she was awake, but she's stubborn and pretended to still sleep. So I then licked her nose until she finally got up. Of course yoo know what happened next: 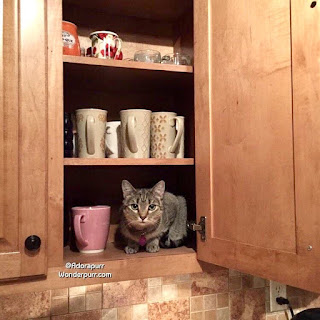 I have not yet been successful at getting her to feed me noms first, then dwink her stinky brew, but there is hope.

So after bweakfast -- I enjoyed a nice wedge of chicky pate accompanied by exactly eight kibbies... followed by licky-licks to the plates of my fursibs who tend to be picky eaters (of which I am not) -- I adjourned to my castle suite where I took a nice sun puddle bath on my hammock.

Yoo see, after bweakfast is when the dreaded AssWabbit is released from his ZenDen to pillage the innocent villagers.

I used to be friends with Wabbit. I pwactically raised him from kittenhood. 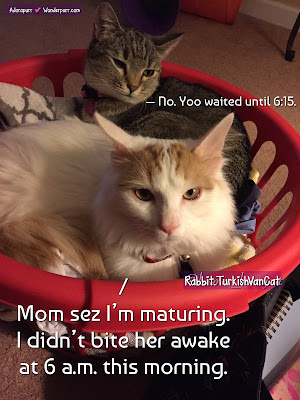 But sadly last year there was a disconnect. He started hunting me like I was one of the bunnies Momma feeds outside our Catio. Last weekend Daddy thought I was safely inside my castle suite when he let Wabbit out of his den. I was actually playing with Dolly Meow in the dining room. When Wabbit saw me, he hurled himself at me, his eyes wild and drool dwipping from his mouth.
I screamed with fears and ran my little heart out all over the house, with Daddy and Momma trying to grab Wabbit. Sadly, they are both past their prime when it comes to catching a four-year-old Turkish Van cat. So it took awhile. Momma finally grabbed me from under the front room couch where I showed her I was scared sh*tless. Yes, my digested meal had reappeared in pootie formation under the couch. Momma was very upset.
So I got lots of attention, and Momma and Daddy had a meeting that in no way would Wabbit be released before they were 100 purrcent certain I was in my castle suite.
So... um. Where was I? 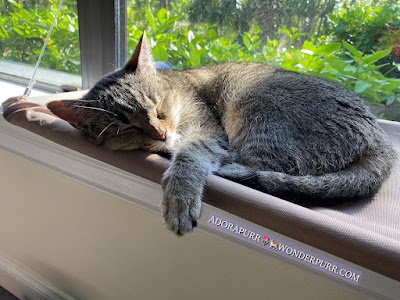 OH! Yes, there I was relaxing in my hammock, when suddenly I heard a strange sound coming outside my window. Normally hearing anything outside my window would have me running for cover, but yesterday I was just so comfortapurr, I didn't want to move. Because, troofully, if I moved, Queen Peaches would grab my hammock for her own. She's incredibly insensitive when it comes to taking my hammock, especially when I have it all warmed up just the way I like it.
The strange sound continued for a while until I could no longer ignore it. After checking to see Peaches was asleep in one of the bed cabanas, I peeked into the yard. At first I saw nothing, but then the sound drew my attention to directly below where I sat. 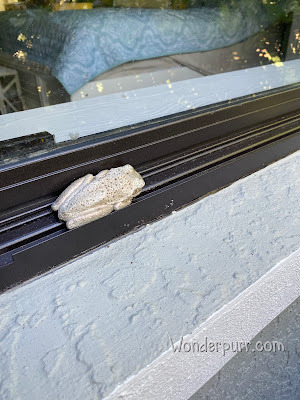 At first I had no idea what I was looking at. I've never seen anything like him.
He was white with tiny brown spots on his back, and about four inches long. I moved to peek at his face. He wore a smug smile, and had large, sleepy green eyes.
I thought him kinda handsome in a reptilian way. Not that I'm looking for a boyfriend. I am doing quite well with the man cats on Instagram, thankyooverymuch.
I pawed the window to let him know I saw him. I meowed sweetly to introduce myself. But when he continued to ignore me, I figured he might be deaf. 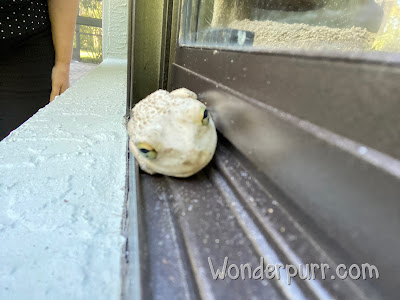 Yoo know how white kittehs are often deaf when they also have blue eyes? Well, I'm not an expurrt on Batrachology so I don't know whether white frogs with green eyes can also be deaf. But this guy was totally blowing me off, like I was meowing to myself instead of to him.
At one point I whacky-pawed the window and saw him blink. So I knew right then he was not deaf, but truly ignoring me. Then, he opened his mouth and proved me to just how RUDE he was. 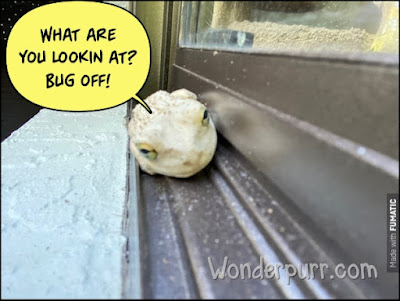 Well, that did it. I wanted nothing to do with a hideous white frog with a snarky smile and no manners. I returned to my hammock, deliberately turning my back to him. The sun was rising high overhead, and the furs on my neck felt kinda scorchy.
*Good,* I thought to myself. *If I'm hot inside my house with air conditioning, I bet Mister Rude is getting sunburned. Bet he doesn't even have the sense to put on Coppertone Ultra Guard Sunscreen SPF 70.* Yes, that's exactly what I thought to myself.
Eventually he moved on without apologizing for his rudeness. Good riddance, I say. I have enough problems dealing with a Wabbit who excels in Cattitude. I definitely don't need some rude visitor with an overabundance of Froggitude.
Have yoo ever had a run-in with a rude visitor at yoor house?
Until Next Time...

It's always someone trying to mess with your bliss. I'm glad you survived this.

Have a fabulous day and week. Scritches all around. ♥

Dori, we sympathize with you, because you had an accident under the couch.
And what is with that white amphibian freakazoid, teasing you like that? Rude times two!

Maybe he thought you had said something rude to him? Maybe "cat" isn't his first language? Oh, who am I kidding? All the frogs that I have met have been rude to me too. Maybe you could introduce him to the Ass Rabbit, they would probably get along great.

Totally rude Frog. Best off on your own Sweetie. Enjoy your sun puddles

What a rude frog! You are better off on the other side of the window because as I understand it, they don't taste good. Eric and Flynn found one once and were being very friendly giving it licks. Next thing they both started foaming at the mouth and ran in to drink water.

I didn't know you found aliens at your place sweet Dori. He probably doesn't understand our language!

I don't know much about those frog-things but I do know that Mom told me once that Angel Sammy had a frog friend who lived under our front porch. His name was Freddy. Sammy liked him a lot - he'd tap Freddy on his back and Fred would do the hop thing - touch - hop - touch - hop until they got to the end of the sidewalk. Weird huh? Well Mom thought it was cute but you know how humans can be. Anyway, glad you had a visitor!