But First, Rumi by Chitra Ramaswami 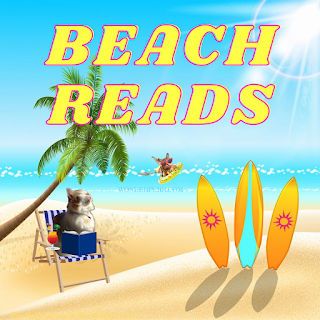 This new author is an unexpected Hero to the Omani Mau (street cats). What Chitra Ramaswami went through to rescue Rumi impressed me greatly, for I too, am a champion of homeless cats.

As Ms Ramaswami says, the cats she usually saw on the streets are very thin. Sickly. Initially she has only mild interest in the cats. In Oman, street cats are a part of life, but life outside the home walls. Feeding them is not encouraged. The cats must fight among themselves for whatever scraps they can find in the trash bins. Chitra, in fact, brought home a sickly, but feral kitten as a child, however it erupted in panic, leaving scratches before being set free, confirming in her mind the accepted notion that street cats were not meant to be pets.

She does not consider herself a cat person when the book opens. She has a rabbit back in New Jersey where her husband works, and muses she would like to have a dog someday. However Fate has other ideas when a scrawny ginger-white cat appears in her path. The moment the cat lifts his head to gaze at Chitra with tired, golden eyes filled with a melancholic emptiness, the stars align. 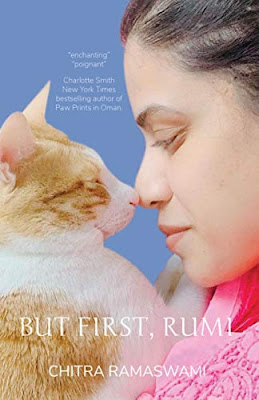 Chitra has enough on her plate. She’s traveling back and forth from her parents home in Oman to New Jersey where her husband works. Plus she’s dealing with a mysterious illness that leaves her feeling faint and weak. Her family is supportive, yet when she attempts to help the sickly stray, she is met with dismay. She knows nothing about caring for a healthy cat, much less a sickly one. But Chitra powers on, seeking advice to help the stray, who has problems of his own dealing with abuse from children that left him with an injury, along with harassment from stronger cats also forced to survive on the mean streets.

Chitra says she always leaves a little room in her heart for the unexpected. Rumi’s arrival is certainly unexpected, but in her heart Chitra soon realizes her initial promise to her family to find this sweet stray a home is futile. Rumi and Chitra are meant to be together. 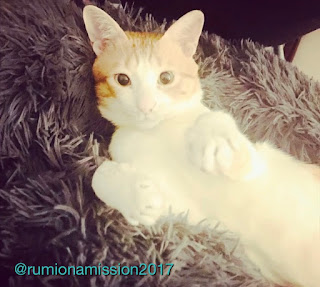 This novel is a keeper. Chitra Ramaswami writes poetically of her life, and of the obstacles of harsh reality she is forced to overcome in order to help Rumi. Not only just Rumi, but by writing this novel, she has brought forth the life of the Mau for the world to see. When I first followed @RumiOnAMission2017 on Instagram, I knew nothing of the struggles the Omani Mau endures. But through Chitra’s eloquent, natural storytelling, my eyes have been opened.

BUT FIRST, RUMI is a well-told weave of one woman’s determination to overcome her native country’s prejudice against helpless cats. I applaud her for answering the call of caring for the Oman street cats when few others do, and I look forward to future novels by this talented author. 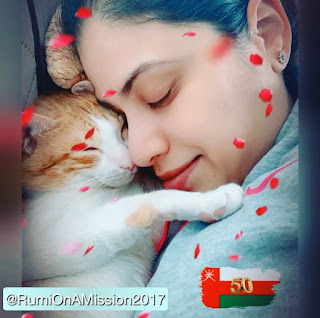 Email ThisBlogThis!Share to TwitterShare to FacebookShare to Pinterest
Labels: Feature Friday, Rescue Me

This sounds like a great read, but Mom is wondering: Is it a novel or a memoir? Thanks for the review. We’ll add it to our must read list. XOCK, angel Lily Olivia, angel Mauricio, Misty May, Giulietta, angel Fiona, Astrid, Lisbeth, Calista Jo, Cooper Murphy, Sawyer & Kizmet