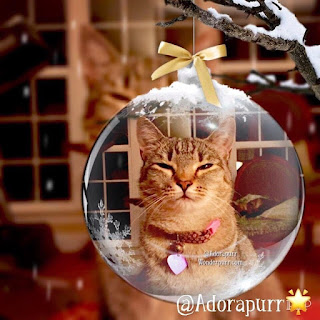 Hi evfurrybuddy! It's me, Dori *wavy paws* all excited because Christmas is on Caturday next week. Is it just my momma, or did Christmas get here way too fast? She said all her energy went into shopping and wrapping gifts, so this year she's skipping the part where she traditionally bakes biscotti.

I got a surprise package this week from Miz Janet over at The Cat on my Head who said she thought I needed Ginger Kitty, a little toy that looks like a gingerbread cat, to make me feel better. I've had a rough year because of Wabbit, who now thinks I'm his prey and needs to be hunted at all cost. He is not James Bond. Wabbit does not have a license to kill. So I had to move into the master bedwoom to live wif the seniors in order to avoid him.

I'm actually happy being in the bedwoom because I have my own Dori Cave. It's a nice chair with a bed on it, and Momma draped a blanket over it so I crawl under to hide. It's vewy cozy.

Here's a pikchure of me in my Dori Cove with my new furend, Ginger Kitty. 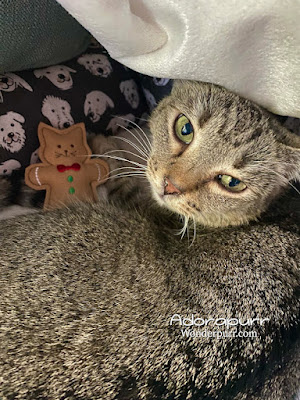 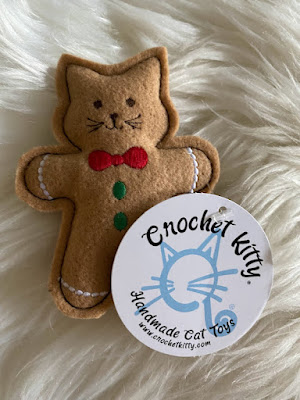 The kitty was designed by CrochetKitty.com.
Miz Janet said she was inspired by how bad Wabbiti has been this year, and also sent Momma these kitchen towels. Thank yoo so much. We appreciate your Secret Santa gifts. 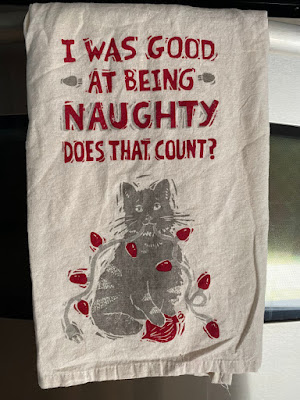 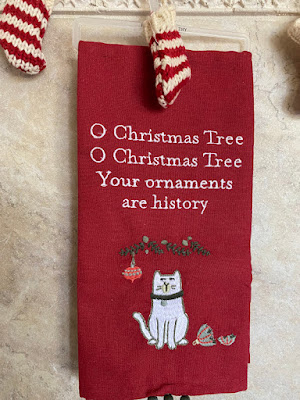 It appears Wabbit will be getting a bottle of Jackson Galaxy's Bully Solution in his stocking this year. As I write this he is wearing his Jail Jams, and just tried to bust down the door to Jesse's room. If Jesse is stressed (and Jesse is always stress, he's sucha wuss) then he pees on stuff.
When stressed, Opie also pees on stuff. And so does my daddy Nikolas.
Momma says she's pretty stressed from all this kitty chaos, and if things don't improve, she's gonna start peeing on stuff too.
I am asking Santa Claus for a camera so I can get it on video for yoo. *giggles behind paws*
Thank yoo for yoor cards and for being a part of our Wonderpurr Furends this past year. We sincerely appreciate yoo all.
Merry Christmas!
And please accept our heartfelt wishes for yoo all to enjoy
a Happy and Healthy Mew Year. 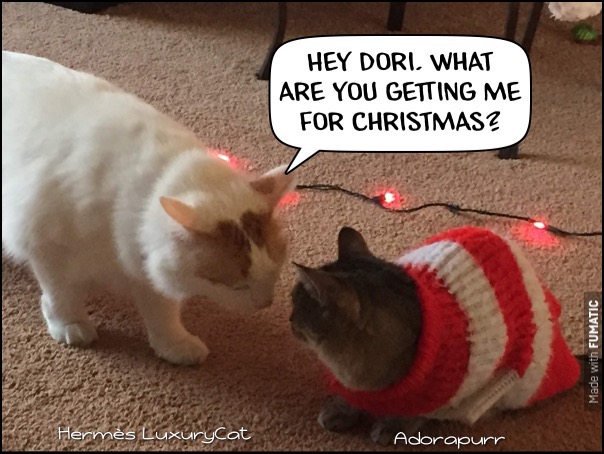 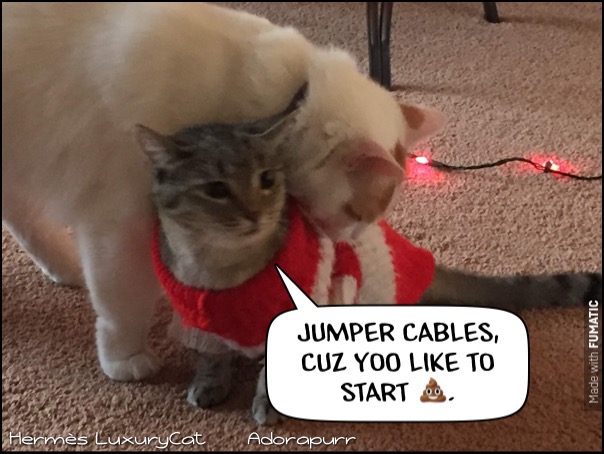 What a fun post and I laughed with mom is going to pee on stuff.

Janet is such a wonderful lady. Wonderful thing she did.

Have a purrfect day. My best to your mom. ♥

That's a lovely cave you have, Dori. Can We come and visit you there? It looks so cosy!

That is a great Dori Cave. I hope things calm down so your momma doesn't have to pee on stuff too.

Those are cute gifts! I'm sorry you are confined to your cave castle Princess Dori!

Oh, dear that sure is a lot of stressful chaos at your place.
Kitties piddling on stuff would make petcretary want to join in the fun activity, too...yup, as if! LOL!

Dori, We love your little cave your mom made for you. Astrid pees on stuff too when she is stressed, which is just about all the time. You did make us laugh with your jumper cables remark! We sure hope Rabbit will mend his ways, so y’all can enjoy Christmas. Sending you lots of love and warm hugs. Stay safe! XOCK, angel Lily Olivia, angel Mauricio, Misty May, angel Giulietta, angel Fiona, Astrid, Lisbeth, Calista Jo, Cooper Murphy, Sawyer & Kizmet

What an adorable ginger kitty ornament! I also think you have a wonderful private cave so you can get some rest from the household chaos at Christmas!