The Struggle is Real 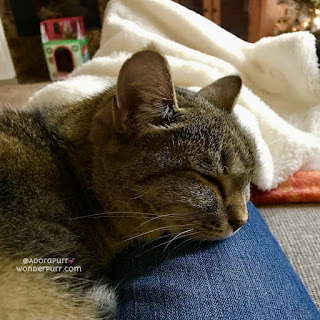 Greetings to all of yoo who are still reeling from the aftermath of Monday. My best intentions to banish the Cujo of weekdays and replace it with Funday has sadly failed. Even my nemesis Wabbit tried his best to send the M-day packing, but it came back like an unscrupulous snollygoster who just won't go away.

Go ahead and Google that word. I'll wait.

Anyway, this morning at precisely one second after midnight, Tuesday safely arrived, so yoo can all simmer down and catch yoor breaths. There's no use worrying about the inevitable until Sunday anyway.

By now I had hoped to report the completion of the novel my momma is working on, but sadly she continues to struggle to find quiet time to allow her brain to function where words flow into sentences and sentences flow into paragraphs that actually make sense. I fear the struggle is real, especially when a certain AssWabbit has his floofy foot in her back and spends his days pressuring her to work. 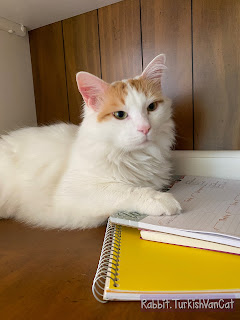 The book is entitled The Diary of an AssRabbit, so of course the subject matter has a keen interest in seeing his story unfold in a timely manner.

However, contrary to what I have told him in memo form -- I refuse to meet with him in purrson due to the restraining order I filed a few months ago -- Wabbit doesn't seem to understand that the chaos he stirs up among our fur sibs requires Mom to disconnect from her work to go deal with him.

And as Mom has Attenshun Deffy Sit DisOdor, every time she disconnects from her work, it takes about twenty minutes for her to reconnect to where she was at the time of disconnection.

She has told me in confidence that not only is Wabbit a distraction, but also Daddy is a distraction, and sometimes my fursibs are distractions all in their own unique ways. But by far Wabbit is Numpurr One.

Anyway, it is my heartfelt wish that you survive whatever chaos this week has planned for you.

I did look that word up and I know many that need to go away too.

Sorry you're having a rough start of the week, but hopefully today is a better day.

Have a fabulous day and week. ♥

Snollygoster! What a wonderful word. Yes, We did look it up - and look forward to using it (mol).

Writers of all stripes have their individual 'blank page' issues, so I'm told.
Am in admiration of anyone who even tries; I'm as yet too undecided to begin.

Mom says Chaos has away of showing up when you least expect it.

We send Jaymee purrayers and Power of thePaw and lots of love and hope.

Rabbit was aptly named with those mad bunny kicking skills! Yes I did google snollygoster! We have a lot of those here too.

I'll bet that book will be something and I'm sure Mama's brain will be on it soon. Fun video too.