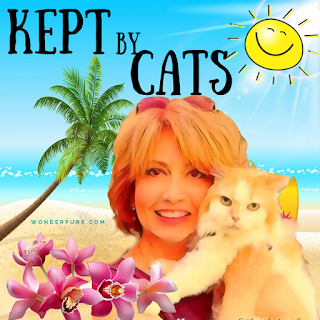 Hi Friends, welcome to another Wonderpurr RE-BOOT post. For years I've stayed in the background like most of us Anipal mom and dad managers do, pushing our fur kids forward into the limelight. But for this Re-Boot, I thought I'd step out of the shadows on occasion to share my favorite stories, be they about Rescue, or something from the Behind the Scenes category. Anyway, let's start with one of my most favorite rescues, Frank.
Amazing what love and the promise of never giving up on someone can do to turn a life around. Meet Frank, my ten-year-old tough-tabby-turned-soft-hearted-sweetie pie. 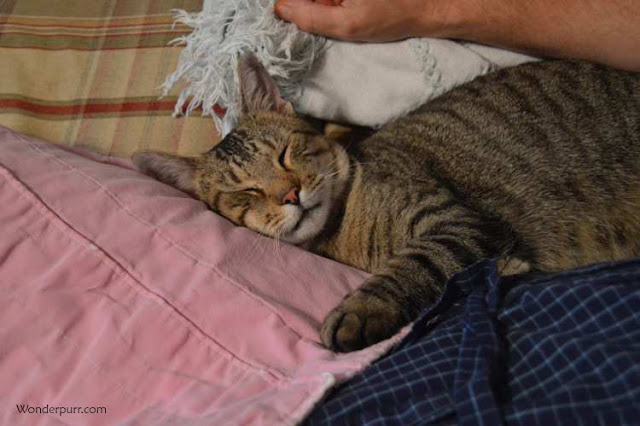 Frank arrived in early spring 2014, acting tough, showing off his man pride with tail held high. I’ve never met a stray like Frank, which is why, of all the 100+ strays I’ve rescued throughout my adult lifetime, I’ve picked Frank to feature first on my Kept by Cats Rescue series.

When Frank first arrived in my yard he was determined to destroy Joshua, a sickly ginger stray who later passed from feline leukemia. Frank was Angry with a capital A-- and determined to kick someone’s tail, mine included. Seven years later I still have vivid memories of battling Frank with a broom to keep him from ripping into Joshua. I kept sweeping Frank back while poor Josh cowered behind me. Finally, Frank turned on me, but again I swept him back until finally…with a huge sigh…he slumped to the ground. I asked if he wanted lunch. He did, and trotted dog-like beside me up to the house. 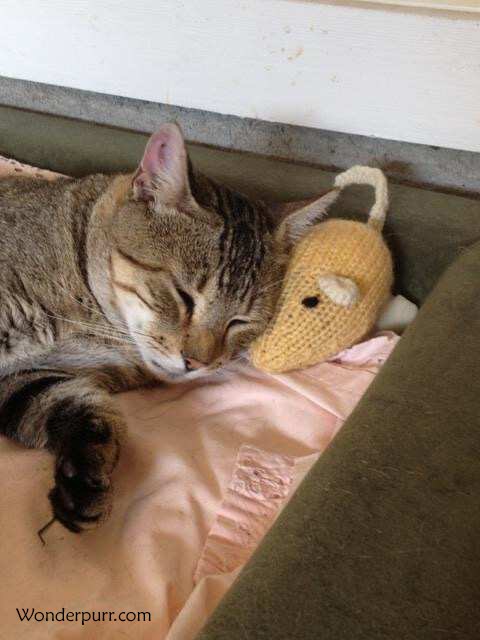 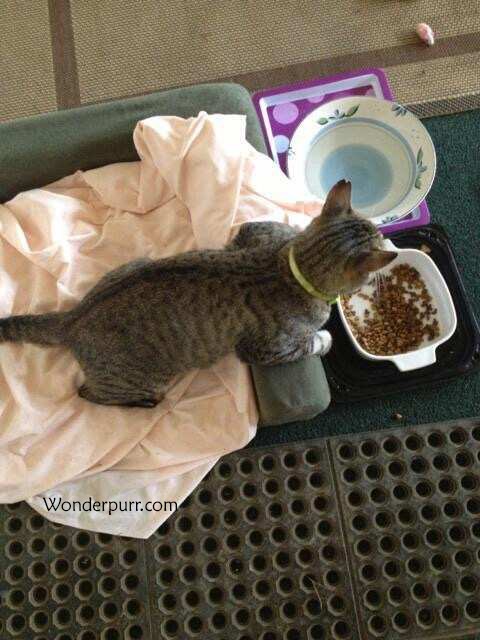 Frank’s history is a mystery, but clearly he’d never had a home. I’m certain he came close a few times, as he took to Rescued Life with such relief that "IT" had finally happened. But it was touch and go for a while, never knowing when he would go from gentle to feral. My Garage Band, Nikolas and Jesse, never really liked each other, but they bonded in mutual dislike of Frank. For the first year he was with us, I hovered over Frank to make sure he wouldn’t pick a fight with my other cats. Frank was big and strong, and could do serious damage.

A couple months after he arrived, Frank started pushing past me into the house. I was surprised that my indoor cats accepted him without drama — especially Herman and Opie who are President and Vice President of the Wondepurr Drama Club. Then I found out my pet sitter, Michelle, was responsible, as he'd sweet-talked her into letting him inside. She didn’t realize he was supposed to be 100% outside.

Frank was a charmer, alright. Still is! My indoor cats all like him, which tells me Frank totally understood his outside behavior as a rough and tumble fighter would not be acceptable indoor behavior. 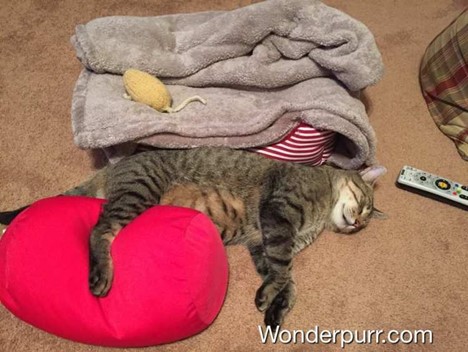 Frank had hip damage when he arrived, probably suffered trauma from a kick or two from some cat hater. I also have hip issues, and my doctor suggested sleeping with a pillow between my legs to help with spine alignment. It worked for me, so I thought it might also work for Frank. And it did. Frank now walks without further issues. 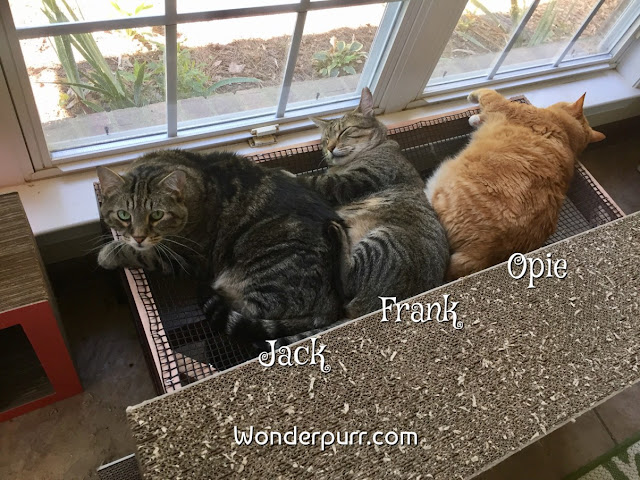 Opie and Jack invited Frank to join their Bromance group

We lost our Buddy in 2013 to a stroke. He was 24 and had been diabetic for 10 years. Looking so much like Buddy, it was easy for Ray and I to love Frank — even when he chomped on our arms.

Herman never objected to him joining our family. The girls – Peaches, Gidget, and Chauncie Marie all adored him. But it was Dori with whom Frank had the best relationship, almost from the start. She loves to wrassle, and although she’s half his size, Frank is gentle with her, even while throwing her to the ground...unlike our resident AssRabbit. 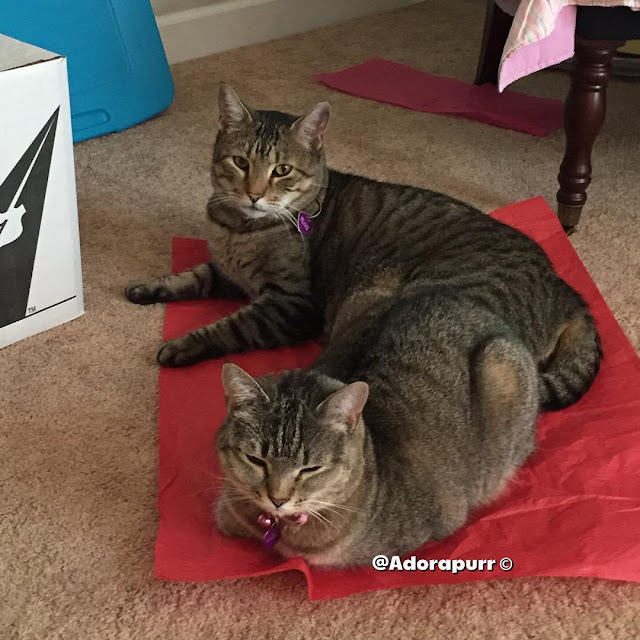 Eventually the chomping stopped. Frank realized he no longer had to fight for a place to live. He even joined Herman, Ray and I on our nightly walks, trotting easily beside us. Whenever a car went by Frank would move to the grass and lie down. Another clue as to his life before us… although when we lived at our old home (we moved to Florida in July) we would see him lying on his back in the middle of the street, sunning himself. Idiot!

I had envisioned traveling with Frank, who is very much a cat-dog. But he has severe motion sickness. Going to the vet requires the use of Ray's old van with a tarp on the floor, a litter box, a roll of paper toweling, a couple plastic bags and lots of air freshener. Even riding in Herman’s stroller makes Frank nauseous. So you can imagine the hell he went through when we drove sixteen hours from Memphis to Florida in July. Poor guy!

As the years have passed, Frank is now a full time indoor cat, although we have a pool cage where he roams leisurely before flopping down to work on his tan lines.

And more often than not, he crawls into bed to lie between us. I’ve never seen a cat who sleeps so deeply. Once asleep, he’s out until morning. My husband thinks Frank couldn’t have slept like that while homeless. But now… 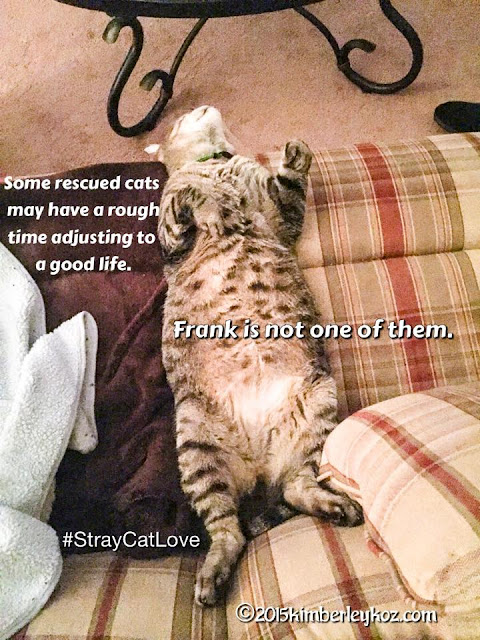 When Frank arrived in my yard, I wasn't in the market for another cat. I already had ten ex-strays. But I believe God sends me those who aren't wanted by others. In fact, Chevy can thank Frank for the patience I now have dealing with hard-bitten strays. Chevy arrived in 2017, and it's taken me three years to micro-manage his wildness so that he now resides indoors with us, under strict supervision. But Frank taught me the promise of never giving up will eventually be rewarded. 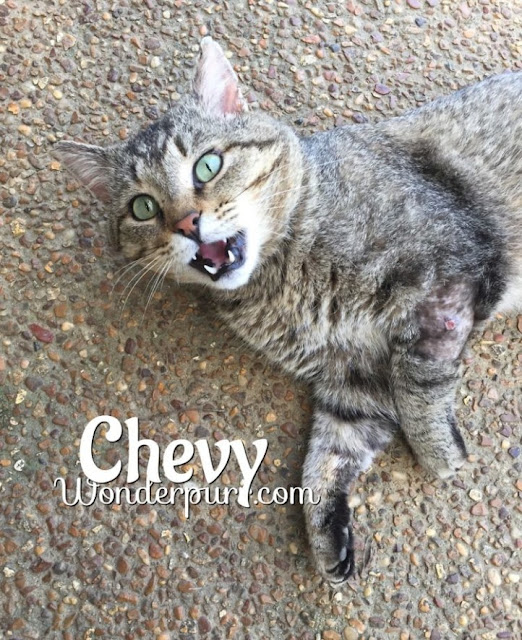 I consider every member of the Wonderpurr Gang a Blessing. And I'm especially proud of the work  I've done to resolve their unknown issues, enabling them to live Happily Ever After... because I need them as much as they need me.

Take a chance on a stray, even if he seems impossible at first. You have no idea the reward that awaits when they finally trust you, and give in to your offer of a Forever Home.

Have you ever adopted a stray with an unknown past? I'd love to hear about it in the comments. And thank you so much for following me from Wordpress over here to Blogger. Your friendship means the world to me. 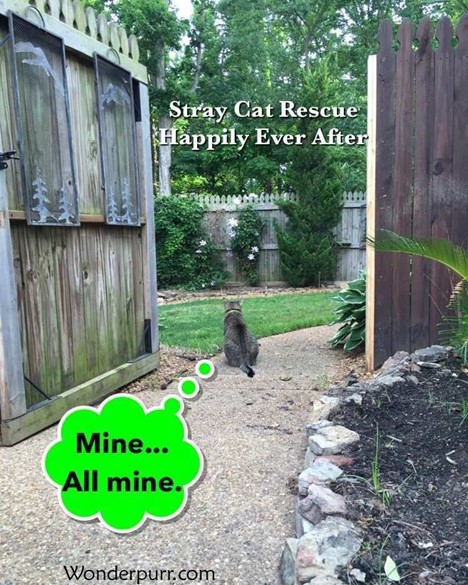 Email ThisBlogThis!Share to TwitterShare to FacebookShare to Pinterest
Labels: Kept by Cats - Rescue

Cooper, a big Maine Coon type, moved in a few years ago. He would beat up any cats that didn't belong in "his" neighborhood, but in the house, he deferred to my two resident kitties. He too would sleep so soundly, he couldn't sleep like that outside. He went over the Bridge in 2016. I still miss him.

Our Miss Fitz and Mr Buttons were strays along with Timmy but all were younger. We sure are happy we gave them a shot. Funny thing is Einstein who was feral until he was just under 4 weeks has been the toughest. He was the runt and almost started by his brothers.(also trapped and adopted out while mom was a return.) Some days I want to throw in the towel on him and after he chases someone and wants to jump on the couch with us I will point and say "EINSTEIN" and he ducks his head and make a funny noise like a cat "sowwy." Strays all deserve whatever we can give them and wow do they ever give back. Great post

Frank is epic, and Melvyn has a few of Franks traits. And we totally agree about giving a feral cat a chance, Smooch was a full 100% feral before his RTA and he fitted in with The B Team really well.

Such a lovely story. Frank looks so relaxed and happy as if he had always been an indoors cat.

All of our cats are rescues. Even Nellie (the Cat From Hell) was a rescue and was particularly difficult. it was because of her blog, I was given the opportunity to help rehabilitate Marv (Marvelous) he has been with me for 3 and a half years now and we still have relapses in his behaviour. I loved Franks story! Thanks for sharing it! Have a marvellously Happy Day! Barb

All my cats are rescues. A year ago I had 11. Three died in 2020 (2 of cancer and 1 of CKD) and another one just was diagnosed with a liver tumor.. She is at least 12, so she is going to be loved on and kept comfortable. They were all close in age so I had no plans for replacement (I just turned 75) but two showed up almost immediately - separately. A young healthy neutered male and an old beaten up black curmudgeon with two battered ears and FIV & FeLeuk. They fit in with my outside cats. The old boy had all 4 canines gone when he arrived, so deep bites are not a problem. (How does a cat break off all 4 canines ? Biting on an enclosure ? He was immediately neutered and de-loused.) No sense in planning is there ? Purrs to all your clowder (and you and Pop)

Oh, Kim, I hope you know how much you're loved and appreciated for being you. That might not seem related to this topic and Frank - but it is. You can tell a lot about a person by how easy they give up - and the work one's willing to put in to make a relationship work. People might not understand approaching cats that way - but then again, most people aren't as deeply bonded to their cats as we are. Being ... complicated myself, knowing all my issues and hang-ups - people who love anyway mean the world to me.

I didn't know much of Frank's history - but I appreciate him all the more. I know what you mean about taking a chance on a stray. Growing up, my brother and I used to LOVE to visit my Grandparents' farm [in Michigan!!!]; they always had farm cats and quite often, kittens. My brother and I would beg my parents to take a kitten home and they always told us the cats were probably sick and we didn't know their history. So, when I met Bear outside, I approached him with that idea. I didn't know him ... I didn't know his past ... he could be sick. But his love and growing attachment to me was just something I couldn't ignore. I tried to talk myself out of adopting him - rationalizing in whatever way I could not to take a chance. But I'm going to tell you - had I not, I'd be dead. I don't understand exactly how he changed everything for me, but he did. His love was powerful enough that I healed - even when the humans around me just weren't capable of giving me that kind of love. Frank's story is every bit as beautiful as Bear's. There are some cats with a capacity for love that is so hard to understand - especially when we can assume they've never been on the receiving end before. Probably more than anything else, Bear's showed me the extraordinary capacity of cats for connection and love.

Thank you all for sharing your stories. We are greatly appreciative of your support and understanding when it comes to the care of strays with an unknown history. We love you all... so much!