Welcome to the 1st Golden AssRabbit Awards ceremony. I'm your host, Rabbit aka Hermes_LuxuryCat on Instagram. I'm also the Original #AssRabbit <- note my hashtag. I never go anywhere without it.
When I put out the call for nominations, I never expected this much competition. We had a total of twenty-three Bad Furs send in their stories. So many great stories that me and my momanager realized quickly that there was no way in hekk that we could choose just one Golden AssRabbit.
Okay, simmer down. I know you're anxious to know who the winners are, but I gotta tell my story. No fair scrolling down. Just WAIT FOR IT! Sheesh.
That's when we knocked heads together to come up with extra categories. We wanted everyone to have a fair chance to win a trophy. So we added the following categories in addition to the Golden AssRabbit:

Sassy & Sweet
Naughty but Nice
Bad to the Bone

We then decided we needed some real clueless judges who couldn't play favorites. This wasn't meant to be a popularity contest. It was meant to celebrate the AssRabbit in us Bad Furs. So that meant finding judges who weren't on Instagram. Pffft! What a chore that turned out to be. Like I said, we had to go the Ends of the Earth to find at least two out of four judges who have no idea who you guys are. We were one step from knocking on the door to the Sunset Codger Care Rest Home to ask for Judge volunteers when finally two clueless hoomons crossed our path. Since 50% of the Judges did not know the history of the nominees, they could only vote based on the entry alone.
The decision by the judges for the Golden AssRabbit was 3 out of 4. The decision for the winner in each of the categories was decided by the number of votes made by those on Instagram and in the blogger world who voted either by leaving an unpublished comment under the Voting Begins post on this blog, or in my Direct Messages on Instagram.
Okay, I'm ready for the big reveal.
DRUM ROLL PLEASE
First Place Winner in the Sweet & Sassy category is: 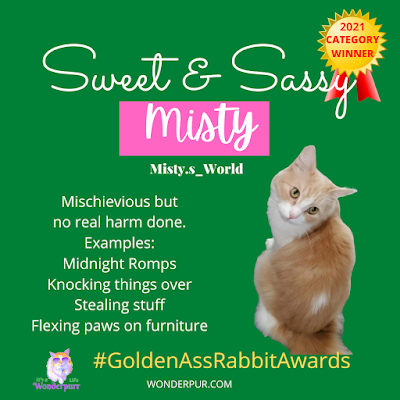 Misty's mom created a fun scenario of Misty the Artiste of Destruction. We laughed and applauded the creativity put into Misty's nomination bio. Concatulations, Misty. You have my sincere awe since I never flex my paws on the sofa...just on Mom's skin.
First Place Winner in the Naughty but Nice category is:

WE HAVE A TIE! 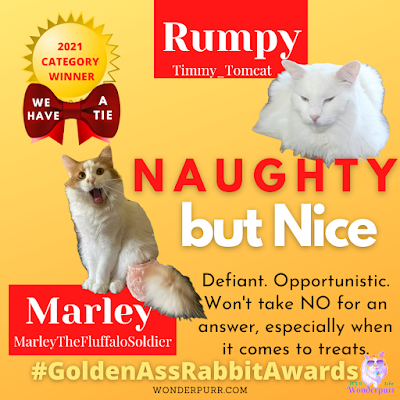 Yes, Rumpy and Marley were neck and tail throughout the competition. And when they voting ended, they still were. So both are the winners.
We loved that Rumpy Bump Stumpnots can still bring it like a bad ass even at his ripe old age, and Marley's treat stealing escapades coupled with smearing his orange floofness onto his hoomon's unmentionables was a real favorite among the voters. Concatulations to your both!
First Place Winner in the Bad to the Bone category is: 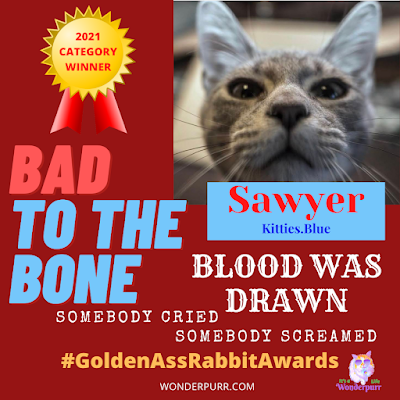 Sawyer's three and a half week disappearing act raised concern and blood pressure for so many voters on both Instagram and Twitter, and in the blogging world. He was pretty famous for being in the dog house already when he went on his walkabout. Sawyer had some pretty tough competition from others in his category, but when the final votes tallied, he was the clear winner.
Concatulations to you all. You really upped the game for nominees in next years competition.
And now... without further adieu. .. It is with great honor that I present the First winner of the Golden AssRabbit Award: 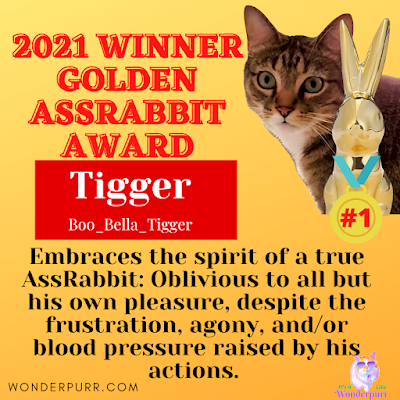 I'm sure you all will agree, the scenario Tigger's mom wrote about him watching her hysteria while she frantically searched for him in driving rain and lightning, and then calling the fire department really raised blood pressures. It sure did for three out of four judges, and ... for most of the pawblic voters. Since we couldn't reveal Tigger as a winner of the Golden AssRabbit, we had to include him in a category too. The majority of the judges put him in the Sweet & Sassy category, where he also tied with Misty.s_World. Since he was already the winner of the Golden AssRabbit, Misty won the category title.
Each of the winners will receive a Golden AssRabbit statue, along with a special kitty toy for the Bad Fur. There will also be an Award Certificate mailed to them. We hope the winners will post pictures of them with their awards.
We at Wonderpurr.com are extremely proud that so many of you cared enough to enter this contest, that my momanager also made prizes for everyone who entered.
Please return here to Wonderpurr.com starting on Monday August 23rd to see the prizes Mom made for everyone. We want you to really enjoy the prizes so we will post 3 or 4 each day, Monday through Friday next week.
Oh. So very impatient. Okay... here's a teaser look at the prizes everyone will receive via their emails: You've been made into a Magazine Cover, unique to your pawtikular badness!
Featured below is our Golden AssRabbit, Tigger, cover meowdel for JERK magazine. 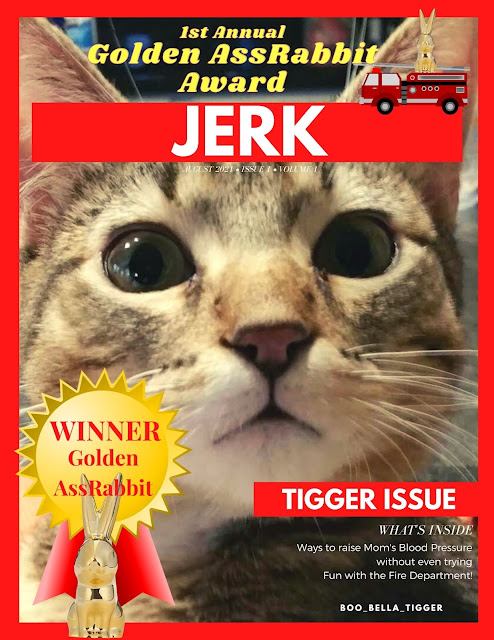 After all of the covers are posted throughout next week, we will then email the covers to the winners so they can use as they wish. We would appreciate them all sharing the covers on their social media accounts with acknowledgement.
Thank you all so very much for taking the time to write a nomination speech, and participate in gathering votes. We plan to keep these awards going for as long as there are Bad Furs to celebrate. So keep a diary, and polish your pens. We think this year's incredible competition has set the bar for the 2022 Golden AssRabbit Awards.
Now, before you scamper off, I want to invite you to come to my 4th birthday pawty #AssRabbitBirthdayBash over on Instagram: Hermes_LuxuryCat. For those of you who don't have an Insta account, photos of the pawty will also be posted here on my blog next Thursday when I write another entry in my Diary of an AssRabbit. 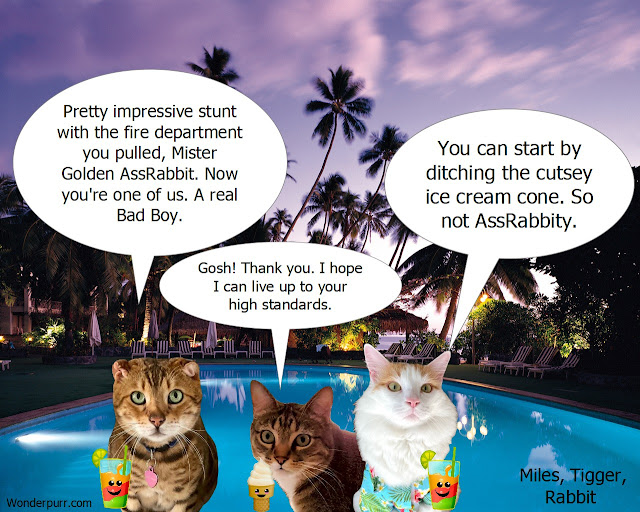 Wowzers…though Sawyer is dis@pointed not to be the big winner, he will accept his first place finish in the Bad to the Bone Category with pride! We actually voted for Tigger, and having the fire department and police come out does earn extra points. We are delighted that our friend Rumpy is also a winner! We think this was a great idea, and we look forward to next year’s contest; though, our mom is praying none of us is worthy of a nomination. XOCK, angel Lily Olivia, angel Mauricio, Misty May, Giulietta, angel Fiona, Astrid, Lisbeth, Calista Jo, Cooper Murphy, Sawyer & Kizmet

Wowzers…though Sawyer is dis@pointed not to be the big winner, he will accept his first place finish in the Bad to the Bone Category with pride! We actually voted for Tigger, and having the fire department and police come out does earn extra points. We are delighted that our friend Rumpy is also a winner! We think this was a great idea, and we look forward to next year’s contest; though, our mom is praying none of us is worthy of a nomination. XOCK, angel Lily Olivia, angel Mauricio, Misty May, Giulietta, angel Fiona, Astrid, Lisbeth, Calista Jo, Cooper Murphy, Sawyer & Kizmet

Oh how fun and two of my favorite kitties won. I love Rumpy and Sawyer.

Congratulations to all the winners.

Have a fabulous day and weekend. ♥

YES and YES! I love the winners and concatulations to the ALL!

Talk about real winners, y'all Assrabbits rock and y'all are special. Congratulations!

Tee hee hee. BIG ⭐️CONCATS!⭐️ to Tigger for taking the Golden trophy! And CONCATS to Mitsy, Rumpy and Marley, and Sawyer for wins in their cat-egories. Rabbit, I'm so glad you plan hd this contest again next year, too!❤️

Congratulations to the winners! That was a hard fought competition.

ConCats to all the winners!!!

FAB-U-LOSSSSS! Concatulations winners and you all deserve your awards FOR SURE. Tigger pulled the biggest AssRabbitty act of them all and certainly makes a perfect BIGGY winner. What fun....maybe I can do something awful between now and next competition and get myself nominated! I'll work on that...........Thanks for the funzies............

Congratulations to all the winners!!! Tigger's " ice cream cone", is actually a Pina Catnipa Colada swirl. Don't let him get near any open flames, I hear that it's 100 proof.

Rumpy: "Whaaa? I did not take the whole enchilada? Having the police and fire come to the house because of you are laughing at them for a trick is kinda sorta best. Me and Marley did tie our catagory so that is cool and Sawyer was really the winner in his paws down. I can't wait to get my prize and Lord it over... I mean show my family, especially Toby! Thanks Wonderpurr pals!"

Many con'cat'ulations to all the winners, may mew continue to live up to these truly epic awards! MOL Next year both Fudge and Melvyn want to join in.

Tee-hee! Our Minko might have won in the naught but nice category...he chewed up countless earbuds, computer power cords and so on...and he bit pawppy twice...needing antibiotics to cure the ensuing infections. Made all our other kitties look like angels...and they were not...till they became real ones...sigh...

Concats to all the winners...should we concatulate them for being naughty?? LOL!